Mary Birdsong
Aurora, Missouri, United States
Greetings and welcome to our BLOG...Enjoy the photos and information. I've got several BLOGS so view them all. Some I have not updated in a while, they're there for sharing. One of my favorite subjects to talk about is our Anatolian Shepherd Dogs. They are totally amazing so please enjoy the photo history of Anatolians in our lives. My husband, Jim and I enjoy doing everything together and in the building of our home we learned much. That was why we decided to share our talents and what we learned through "Elegance In Concrete". I love being creative and this is a wonderful avenue that can really put that special "Elegant" look into your home or business. Plus we love what we do. Contact us if you have any questions. Look forward to hearing from you. 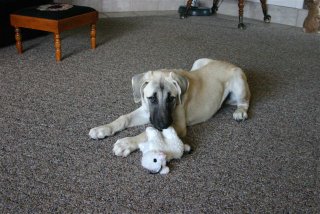 Megs new home is with Helen. Helen lives on a ranch in Oklahoma. Her passion is her Border Collies. She takes the Borders to Cattle Dog Trails and wins! Her new companion, Meg, will be traveling with her and the Borders, but Meg gets to sleep with Helen in the trailer. Then Meg will go with Helen to meet everyone she competes with. 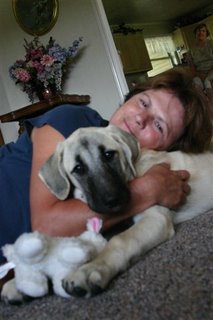 Here's some at home photos of Meg and Helen..... 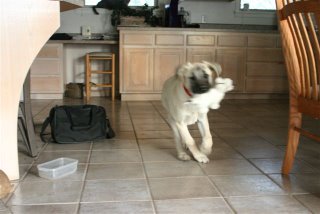 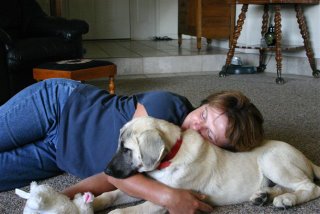 This is Pat with her new boy. She and her mother drove down to pick up one of our male pups. She is calling him Kus (long u). He is becoming great friends with her 2 yr. old Bedouin Arabian Stallion. Pat said her stallion is sooo very gentle with his new companion. His first encounter with him they gently and ever so carefully sniffed noses.... 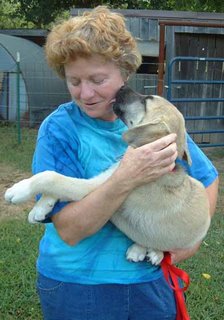 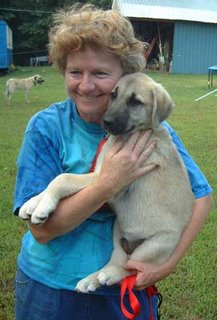 Time for the drive home with Pat and Mom 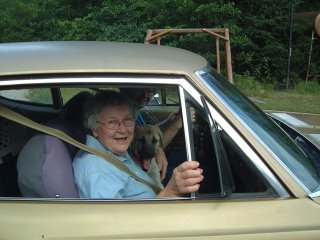 Grace is living on a Horse ranch in Victoria, BC with Ray and Lee and their Jack Russell Terriers, Will and Chloe 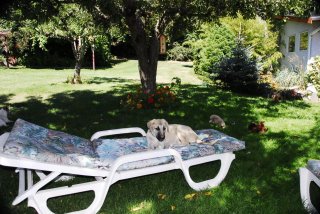 Some about her journey and new owners, Ray and Lee.....
"Well that was definitely a long day for both puppy and me.
It was very stressful when I got to the airport and they told me no dog was on the flight! Luckily the fellow also added that she just did not show as being on the flight...she still could be on it but somewhere along the way they did not mark her as being loaded into the plane. With a few phone calls to Lee who in turn was phoning the airline it all came down to no one knowing for sure if she was on the plane at all....Lee said the guy she talked to "can't find her anywhere" of course that did not sit well with either of us!

"The bottom line was I sat for 1.5 hours having no idea if my puppy was on the plane or in some other plane going to some other city.

"Finally as 9:00 pm approached I saw her crate sitting in the cargo bay.

"As soon as I started to walk near her crate she stood up and cocked her head to one side to get a better look at me. After some paperwork I was able to take her outside and give her some much needed water. As soon as I opened up the crate door she began to lick my face so I think she was very happy to see me. She was reluctant to come out of her crate but with a little time and some kind words she emerged.Thinking I was doing her a favour I gave her plenty of water and some food. After cleaning up the crate and putting fresh bedding in we got in the truck and headed for home. I should have known better ...and within a minute all of the water and the food came up and out, right into the centre cup holders. This was good as it made for simple clean up.

"After letting her know that it was okay she sat in-between the two front seats and promptly placed her head on my should and fell asleep within five minutes.

"We had a few rest stops on our way to the boarder then reach the ferry around midnight. We slept together in the back of the truck and got the first ferry back home at 6:00 am. She is really a brave little soul. After getting home and doing a little introduction to the Jack Russell's she settled right in. She follows me around the farm never letting me get too far away.

"All three are having their morning nap at this minute.

"We have chosen the name Grace for her barn/farm name" 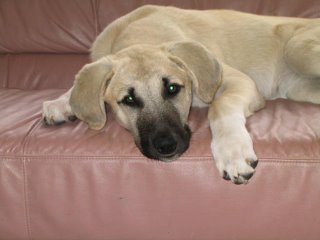 Another e-mail, from Lee:
"I caught Grace on the couch in the office snoozing today, at first she was embarrassed then decided to pose for her picture. She makes me laugh all day, it's hard to get anything done. Grace is very, very smart and extremely gentle with the other
dogs and children. Chloe who I thought would be a problem just ignores her and acts like a grandma, Will is trying to establish who is the boss only Grace already knows she can out run him, so he is finally giving in and
making an effort to play. One of the boarders has a young Russell Beagle cross, and the two play quite hard. The neatest thing is to watch her when she catches a scent. Right now she has to smell, then taste everything.
Thanks so much for sending her she really is quite special." 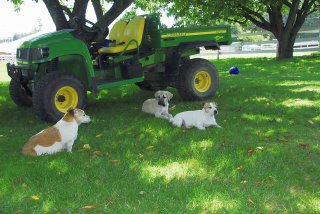 "The male Russell was running up to me and even as a little puppy she jumped in-between us, took her stance with her front feet spread apart and her chest puffed up as big as she could make it. She let out a heck of a bark/growl and stopped the Russell in his tracks. They are working it out and had some good bonding time this morning. The older female Russell is dealing with her much better than I thought she would. She's kind of taken on a grandmother role." 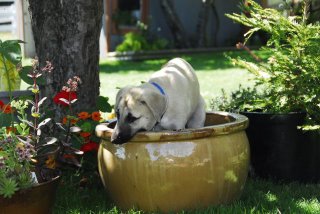 "Grace and Will are the best of friends play all day long and go everywhere together. These were taken in the office while I am trying to work and have to keep stopping to laugh at them. Her latest is to sit on Will and look around with a goofy look on her face. Watching her develop and her instincts kick in has been a lot of fun, interesting and at times challenging! We are all working it out and thoroughly enjoy her in fact love her to bits. Even Chloe has found a place in her heart for Grace". 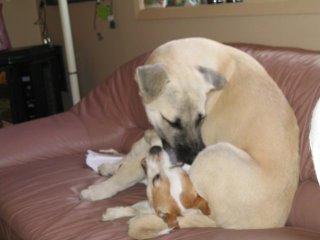 Here's Grace at 5 months playing with her buddy Will. Who's on top? 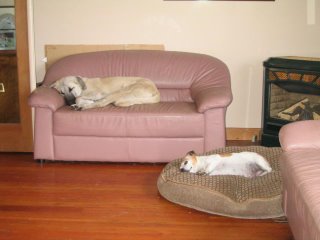 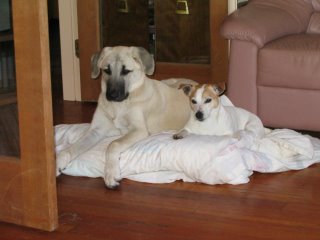